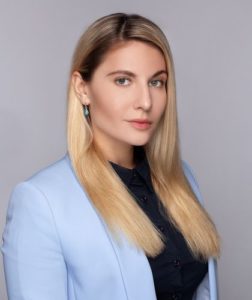 Ksenia heads the practice of resolving disputes in general jurisdiction. Her specialization is labor and immigration law, family and inheritance law, civil law, administrative proceedings, representation and protection of rights and legal interests in the framework of the procedure for bringing to administrative responsibility.

Ksenia specializes in the sphere of representation of interests of legal entities (arbitration courts, courts of general jurisdiction of all instances), and interests of individuals (civil, administrative proceedings).

She represents clients in cooperation with the State Labor Inspectorate, procuracy, the bailiff service and the administration of the relevant region in order to achieve the goals of clients including out of court.

Also Ksenia’s activity is related to registration of labor and migration permits for foreign citizens-workers on the territory of the Russian Federation (all categories of foreign citizens) who are invited to work by a company (individual entrepreneur as an employer).

Since 2011 she has been published in specialized legal and other periodicals on various legal issues, including questions of public international and private international law.

She is a permanent participant of conferences and competitions in the field of international public and private law, as well as events (forums) organized by competent government agencies for young scientists and researchers. In 2012, as a student of the Far Eastern Federal University she took the second place in the All-Russian Student Law Olympiad, also she is the winner in the Law section of the VII All-Russian Conference “Russia – XXI Century, in August 2015 Ksenia participated in the Iturup All-Russian Youth Forum on the island of the southern group of the Great Ridge of the Kuril Islands for young scientists, graduate students, and teachers of social sciences of Russian universities, she made a presentation at the International Conference “Legal Status of the Arctic and Actual Problems of International Maritime Law” which is the first major event in the framework of the Joint Institute for Border Sea and Arctic Research, created by the FEFU Law School in partnership with the Shanghai Transport University.

This report was included in the scientific collection on the results of the conference, which has a scientific citation index, in October 2018 Ksenia took part in the section “Legal regulation and protection of flora and fauna objects” of the IV Pacific Legal Forum “Prospects for the development of legal science, practice and education in the Asia-Pacific region” dedicated to the celebration of the 60th anniversary of continuing legal education in FEFU and the 99th anniversary of legal education in the Far East.

Since May 2016 Ksenia has been a co-organizer and co-moderator of the regional event “Legal Forum Life” within the framework of the St. Petersburg International Legal Forum. In 2016, 2017, 2018, 2019, this event was held on the basis of the Far Eastern Federal University.